Detoxification is a process that the body does continue without us knowing it.  Our bodies have their built-in filtration system that removes toxins from our bloodstream and tissues.  Our bodies have a certain capacity for detoxification but if we continue to overload our system with toxins, there will come a point where we are overloaded and the immune will not be able to handle the insults and become overwhelmed.  When the system is overwhelmed, the toxins and microbes will start to have an influence on the body’s normal functioning metabolic pathways and begin to negatively affect them.

While your liver may be your main blood filtration system, you have several other filtering organs:

The main organ of detoxification is the liver, it is found in the upper right quadrant of the abdomen and extends past the midline.  The liver is made up of 4 lobes.  The portal vein supplies the liver with blood from the gastrointestinal tract, spleen and pancreas, while the hepatic artery supplies the liver with blood from the heart.  Arteries take blood containing oxygen to the organs while veins take deoxygenated (meaning used) blood back to the lungs to get more oxygen.  Both the portal vein and hepatic artery pump approximately 1400 ml blood per minute into the liver.  Our lives depend on the liver’s ability to remove toxins from the bloodstream.

Here are some of the functions performed by the liver:

This should paint a picture expressing the importance of a well-functioning liver.

Kupffer cells found in the liver are responsible for removing over 99% of dead cells, bacteria and food contaminants in the blood. Other important cells, hepatocytes, are important when it comes to removing drugs, heavy metals, chemicals, alcohol, and hormones from the blood.  The process of detoxification involves two important steps:

These processes TRANSFORM toxins (from within-endotoxins AND toxins from outside – exotoxins) using a complex of detoxification chemicals, known as the P-450 system (short for the cytochrome P-450enzyme system). Phase one prepares toxins for phase two detoxification.

For toxic and metabolic waste to be removed from the body, these compounds need to be water-soluble so that they can exit the body via the urine.  The substances that are not able to be converted into water-soluble compounds are then excreted via the bile, bile is used to also digest fat.  Bile with the toxins is then transported into the intestines where the toxins are excreted via the faeces (your stool).  Other toxins that are still not removed from the body might be eliminated in the:

Toxins remaining in the body are then STORED in the fat (adipose) tissue and nerve cells, this contributes to a wide range of degenerative conditions.

As toxins are broken down in the process of phase one many free radicals are produced, managing free radical production is vitally important in our quest for disease prevention, health and longevity.

Free radicals are highly reactive species of oxygen that can cause damage to proteins, fats, cholesterol and nucleic acids (compounds that use used to make up our DNA and RNA).  These free radicals are usually managed by our antioxidants (Our antioxidants are Vitamins C and E, carotenoids and selenium).  When we are exposed to increased amounts of environmental pollution, smoking, radiation, wrong foods, infections and pesticides we produce increased amounts of free radicals and over a period of time we do not have sufficient nutrients in our diets to combat the excessive free radicals that we are producing and so the progression of disease begins.

There are many nutrients needed to support the healthy process of detoxification, also to keep in mind some people have SNPs in their P-450 system and or their phase two enzymes (Please see the DNA/Genomic tab for a fuller explanation). The figure below gives a brief idea of what nutrients are needed to assist with healthy detoxification if our diets are poor and our stress levels high it is a matter of time and the liver will start to perhaps accumulate toxins instead of detoxifying them appropriately. 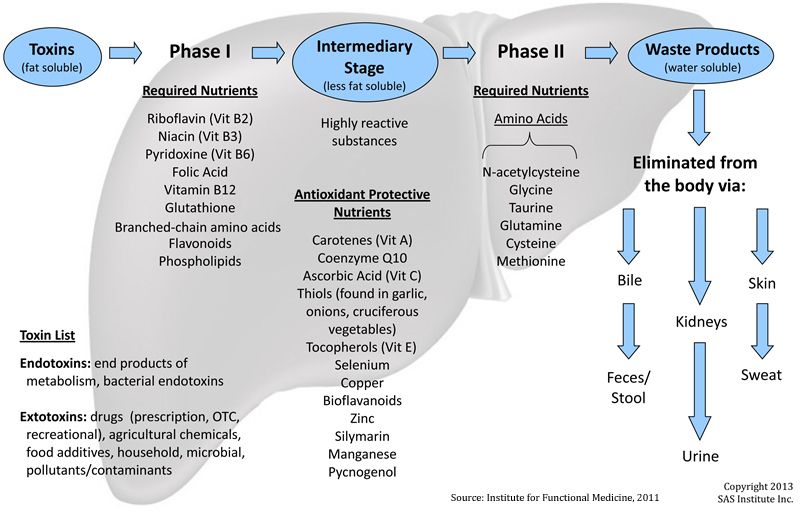